The hydrogen economy is the use of hydrogen as a fuel, particularly for heating and transportation and using hydrogen for long term energy storage. In order for human society to move away from the hydrocarbon economy, hydrogen is considered, as its combustion only releases clean water, and no CO2 to the atmosphere. Hydrogen gas itself can therefore be considered a clean fuel. Hydrogen gas, however, does not occur naturally in convenient reservoirs; it must be produced from other sources. Natural gas – mainly steam methane – reforming is the dominant method of doing so. Around 96% of the hydrogen produced annually today is produced by this process. Reforming natural gas produces hydrogen, but also generates carbon dioxide so that its potential environmental benefit is hampered.

Green hydrogen can be produced with zero emissions by means of water electrolysis powered by renewable energies, remarkably, solar among these, to produce so-called “solar hydrogen”. 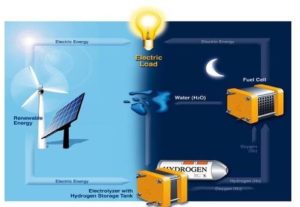 According to a 2015 paper in Energy & Environmental Science by Dumortier et. al. from the Laboratory of Renewable Energy Science and Engineering at École Polytechnique Fédérale de Lausanne (LRSE-EPFL), High Concentration Photovoltaics (HCPV), due to its high conversion efficiencies, is one of the most promising options for the production of solar hydrogen in a cost competitive way.

Key for cost effective performance of solar hydrogen production systems is the Sun to Hydrogen (STH) efficiency and in this regard several STH efficiency records have recently been published that resort to very high efficiency multijunction cells that have to be integrated in high concentration systems to be economically feasible.

However, many of these record results have been obtained in laboratory conditions, with very low power systems (<10W) or non-practical setups unsuitable for real world applications.

CPV4H2 project attempts to move one step further in the development of solar hydrogen production and develop a combined HCPV-electrolyzer system with a practical value of unit power in the kW range and based on commercial technology with market track record.

The project is to be developed by a consortium of companies and research centers consisting in BSQ Solar as manufacturer of HCPV systems, H2B2 as manufacturer of electrolyzer systems, and ISFOC the Institute for CPV Systems, that will develop the HCPV-EL power conditioning coupling system as well as provide the monitoring system to validate the outcoming prototypes of the project that will be installed in its premises in Puertollano. Also participating in the project the said Swiss LRESE-EPFL and the Spanish National Center for Hydrogen.

The project is being partly funded by the Spanish Ministry of Economy, Industry and Competitiveness, through an INNTERCONECTA grant. Kick-Off meeting took place at ISFOC’s facilities in Puertollano on November 15th.